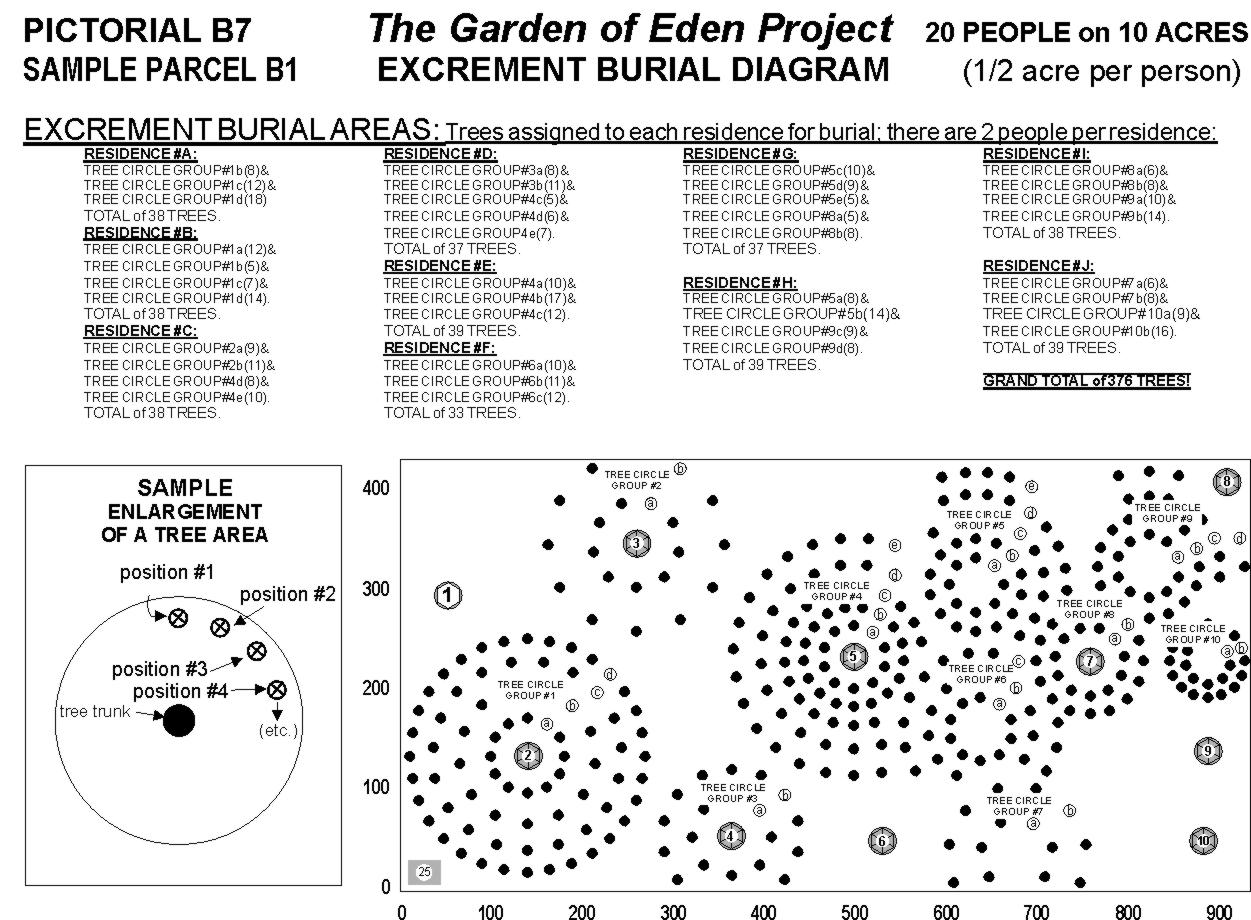 While the plan pictured above and outlined below is a good one, it probably cannot be used for maybe 10 to 15 years (within the SAMPLE PARCEL B1 design) due to the lack of space to bury excrement, because most of the land is being used to grow one-season crops. COMPOSTING TOILETS and/or some other altenative system of burying well-aged excrement will have to be used for the first few years after the fruit trees are planted. Excrement must be aged long enough for the bacteria to thoroughly break down before it can be buried into the soil so the bacteria will not be absorbed by the crops or the trees there. The well-aged excrement could be worked into the soil in an area where a plant was recently harvested.

The MANURE DROP-OFF container is shown as item #25 in lower-left side of PICTORIAL B1 as a dark brown box, and as a grey box in the same position in PICTORIAL B7, above. This container would be about 30 feet by 40 feet, or 1,200 square feet. This container can be used as a "staging area", if necessary, to place excrement that needs more time to completely break back down into rich, healthy soil. Perhaps it could be used in conjunction with composting toilets. There could be maybe eight compartments in the MANURE DROP-OFF bin, to allow for eight cycles of time to allow the manure to properly age.Then when it has aged there long enough, it can be buried into the soil.

Comparing this PICTORIAL B7, above, to PICTORIAL B1 you can see that this is another representation of the same piece of land. The numbered trees in this PICTORIAL B7 represent a sample diagram for people to keep track of where to bury his or her excrement. The idea is to divide up the number of trees relatively evenly among all the residents and to assign each person a proportionate amount of trees, around which their individual excrement is systematically buried. In the top half of this pictorial above, we see a sample way for the trees to be divided up among the residents there.

The excrement is buried in a circle around each tree, as shown in the lower left corner of PICTORIAL B7, in the very large circle with the words:"SAMPLE ENLARGEMENT OF TREE AREA" inside of it. The actual distance from the tree trunk to the burial spot would be about ½ of the planting distance between trees, as shown in the Fruit & Nut Trees: 15 YEAR YIELD ESTIMATES link. The average planting distance for all the trees would be 24 feet and ½ of that is 12 feet.

According to this plan, a person buries their excrement at the first tree, (in their group of trees, as shown in their assigned trees in the top half of PICTORIAL B7), in "position #1". After burying their excrement, a bright-colored stake is placed next to this burial site, so no one steps in it.

As the third cycle through all 25 trees is started, the position #3 is used for burial. Each time another cycle through the 25 trees is started, the next position is used. When all the positions have been used, the position #1 is used again, beginning the whole process all over again. By this time, the old excrement buried there has decomposed totally into rich, organic soil for the tree to use as fertilizer. (See also, COMPOST BINS and MANURE DROP-OFF, previously in this description.)