Here we have a plan to deal with our own human excrement in a way that totally recycles the stuff that Nature intended for us to put back into the LAND, not into the sewer systems and not out into our waterways! If people's excrement needs to be aged, before putting it into the soil, it could be placed in the MANURE DROP-OFF (see previous page) until the bacteria has broken down the excrement sufficiently and it is safe to use in the soil.

In PICTORIAL D1, the circles of DOTS representing the TREES can be used as a diagram for people to keep track of where to bury their "excrement" (whether "aged" or "fresh"). In the center of each group of tree circles is a number with a small red circle around it, which represents both a residence space and a tree circle group number. Then on each circle is a lower-case letter. These numbers and letters, used together, are for identification purposes and are used on the next page to identify which tree circle groups are assigned to each resident. The idea is to divide up the number of trees relatively evenly among all the residents and to assign each person a proportionate amount of trees, around which their individual excrement is systematically buried. The excrement is buried in a circle around each tree, as shown in Figure #1, the "SAMPLE ENLARGEMENT OF A TREE AREA" on the left. 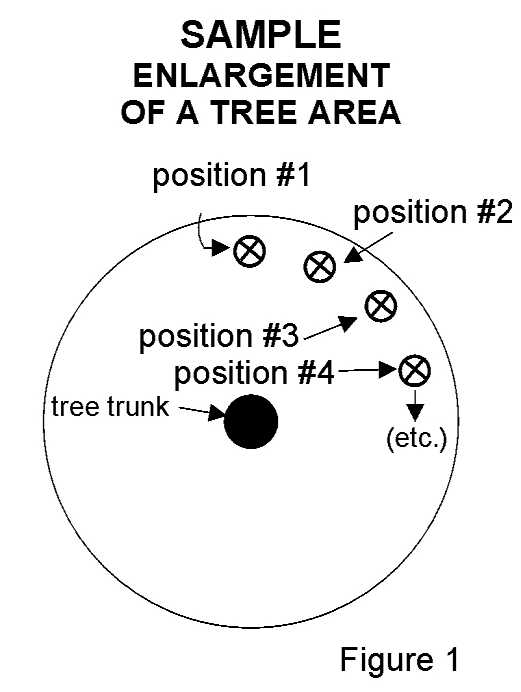 According to this plan, a person buries their excrement at the first tree, (in their assigned group of trees), in "position #1", in Figure #1. After burying their excrement, a bright-colored stake is placed next to this burial site, so no one steps in it.

For their next excrement burial, they walk back to the first tree and pull up the bright-colored stake and put a dull-colored, but visible, stake in its place. Then they walk to the second tree, bury their new excrement and put the this bright stake in position #1 at their second tree. This process repeats itself for each of their assigned trees, putting a total of about 19 (or whatever number they are assigned) dull-colored stakes, one at each tree. Then the cycle starts over again at the first tree, but this time around, for each of the trees, position #2 is used for excrement burial. This second cycle through the trees, the dull-colored stake in position #1 is moved to position #2, at each tree, as it is each tree's turn to be the excrement burial site.

As the third cycle through all 18 trees is started, the position #3 is used for burial. Each time another cycle through the 19 trees is started, the next position is used. When all the positions have been used, the position #1 is used again, beginning the whole process all over again. By this time, the old excrement buried there has decomposed totally into rich, organic soil for the tree to use as fertilizer. (See also, COMPOST BINS and MANURE DROP-OFF, on the previous page.)

Perhaps an individual chart could be placed in a person's residence. Maybe a clear plastic cover could be placed over the chart, and a large "X" (in washable magic marker?) marked over the trees that have been "used", each cycle through the trees, to help the individual locate their next excrement burial site more readily. (Also in the "enlarged" tree, the "position" could also be marked.) When all the trees have been "X"d, the "X"s could all be erased and the person could start all over again, marking the trees for that cycle through the trees, and marking the appropriate "next position" on the "enlargement" tree.